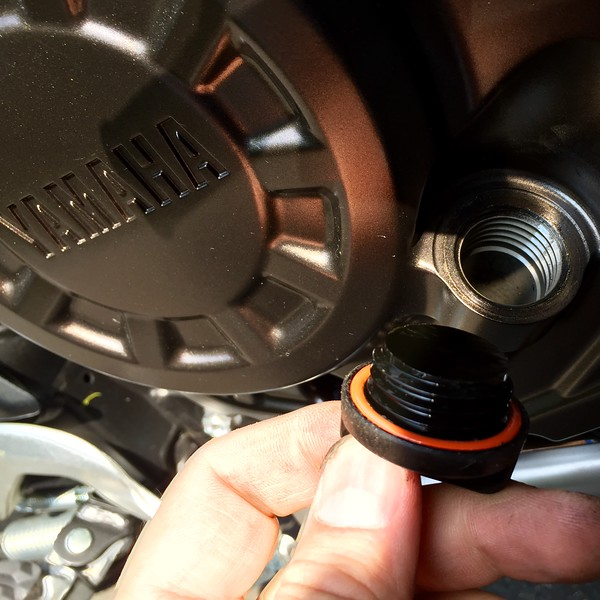 Oil changing. I’ve had the dealer do it for me before, which involves schlepping up Route 7 to Danbury and waiting…waiting…waiting. Ordinarily, it’s also an excuse to indulge in some fantasy bike shopping and gear fixation.

But since I have a New England road trip coming up in less than a week, I decided it was time to pull my big-boy pants on, get friendly with my Not-So-Little-Pony, and do it myself.

I took her for a 10-minute warm up ride around the neighborhood, then parked her on my molten, 98-degree driveway and set up shop.

Neat freak here. My mother is German. Hardcoded into the genes. Just can’t help it.

Thus, I jumped into the manly and motorly art of earl-changin’.

Step one, remove the psuedo-plastic bash guard. To be fair, it’s not much of a bash guard, but probably ideal for suburban ADV-Loungers like me. Defends against errant imported beer bottle caps or granite chips from the really nice driveways.

Don’t forget all the nuts…two fore and two aft.

Nice to be using the actual tools inside my very sweet tool roll. I got it from a guy In Wisconsin who makes them himself, and will sew them to your exact specifications. Great piece of kit. No affiliation other than the fact that I bought one from the dude here: TheoHenry Tool Rolls

Then spin off the filter (sorry friends—here’s where my hands started to get greasy and photo-documentation became a challenge, so no pic). I didn’t use/need an oil filter wrench. Just wiped it clean, gripped it with my bare mitts, and twisted hard.

Now’s when the real fun starts. Bust out your favorite 12mm socket, position your oil pan under the oil plug, and get cranking.

After undoing the plug, what started as a gusher started dribbling suspiciously early. And it turned out to have spewed only a meager 1.5 quarts of oil in the pan (the little hash marks on the inside of the pan said so).

The bike ostensibly holds nearly a gallon of synthetic dinosaur juice (3.8 quarts, to be sure). I wondered if the oil was somehow lingering up inside the engine, held up there in the cylinders by the vacuum effect (even though the filler cap was off). So I rocked the bike back and forth vigorously on the center stand, trying to squeeze the remaining 2.5 quarts out of the well. I got some, but certainly not all.

Here’s all I had to show for a day’s worth of oil-drilling.

That’s when I became suspicious, and turned to the internets. Thanks to several posts on the Yamaha Super Ténéré Forum, it became obvious that there’s not one but two oil drain plugs on the Tenner: one under the gearbox…and one aft, under the oil reserve pan. This I confirmed by paging through that pristine, uncracked text otherwise known as “The Owner’s Manual.”

And when you tap that sucker, that’s when the real gusher starts.

I drained and rocked, drained and rocked, until there was no more than a very occasional drip of oil. Then I replaced the plugs and copper crush washers (reused them this time), torqued to spec, primed the new filter with 10W-40, oiled the gasket, screwed her on double-hand-tight, and poured about 3.5 quarts of oil into her (based on the clear plastic window gauge on the oil bottle). Closed the filler cap, fired her up, and nearly done.

I rolled the bike onto the flat garage floor to check the oil level. Since the Ténéré uses a dry sump, and sucks oil out of the pan via a pump, you really can’t be “too low” or “two high.” You just need enough oil in the pan to be siphoned up to do its work.

After shutting her down, my first check looked like this:

I let it sit a while longer, and it didn’t get any higher. So I added maybe another pint or so of oil, which brought the level to this, healthily within the two bars next to the sight-glass window.

And voilá. Done. Here’s my Not-So-Little-Pony…next to my new actual Little Pony.

See? Friendship really is magical. But more about the lil’ Guzzi in another post…