I never really post anything here on longitude&gratitude about work, because I’m a firm believer in the separation of church and state. And I haven’t seen a constitutional exception yet that would call for the co-mingling of the Church of motorcycles, scooters, and other two-wheeled faiths with the State of my professional work life. Until Cannes. To put things in context: on the State-of-Work side of things, I’m an advertising guy. Been in the business for 27 years now. And while it’s been a June ritual for many ad guys (and gals) to make the annual pilgrimage to the south of France for the storied and celebrated Cannes Lions festival of creativity, I’ve managed to spend 27 years in the agency business without ever making the trip. So before I wound up like the guy with the set of wheels in this picture (no, not the Bentley), I thought it was finally time to go.

For an entire week the sands of Cannes (rhymes with cans, not cons) are choked with young creatives, curious clients, agency brass, and media/tech companies all jockeying for limelight and some iconic award show metal—plus the bragging rights that accompany these little kitties. 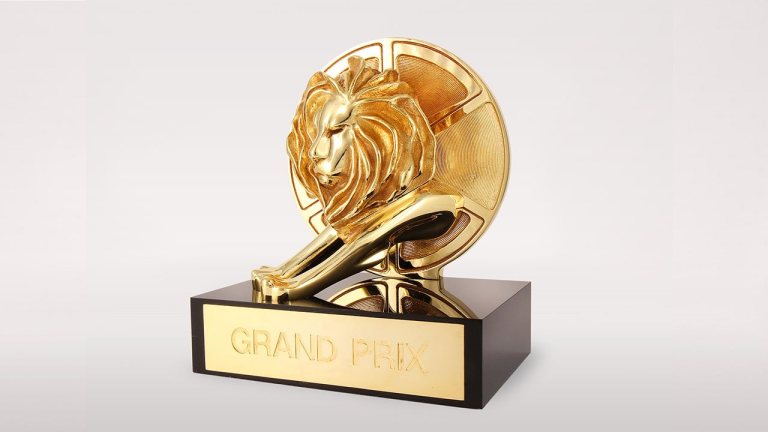 At times, the hype, hustle, and hyperbole folds in on itself like a self-promotional supernova, which can make you want to take an emotional shower. You want to find a quiet spot under a tree to sit in the shade, read a paperback, and eat an apple in monastic silence.

But at other times, it can inspire the living shit out of you, and make you believe there’s nothing more important on God’s earth than making a viral web video to subversively raises awareness about the dangers of railroad crossings, the merits of which you can drunkenly debate with industry peers until 3 in the morning with sweat and pomme frites grease glazing your chin. If you’re curious, here it is (the video, not the chin).

There’s no question that the trophy-winning (aka “metal-worthy”) advertising work you get to see at Cannes is as jaw-dropping as the Bentleys, Lamborghinis, and Ferraris that literally clog the streets. But this latter metal is usually accompanied not by shaggy, tattooed creatives but by vertically-challenged Russians or gulf-state petrogarchs, toting leggy human trophies all their own…

So why the heck hadn’t I been? Well, because my particular advertising life has been dedicated to the wonkier and more complex (but to me, more interesting and meaningful) healthcare advertising space, which has never been given much space, time or interest at Cannes. Until this year, when Cannes launched Lions Health, a sub-festival dedicated our kind of work.

So this year, I not only managed to attend Cannes, but served on the inaugural Lions Health jury. Here we are, standing behind the estimable Jeremy Perrot, jury chair. He’s not from Brooklyn (more like Brisbane). I’m the goofball in reading glasses, just to the right:

It was a genuine privilege and hoot, and an intense but rewarding experieince. I spent three 12-hour days sequestered in a jury room debating the merits of good and great ad work, met tons of great folks, made new friends (even among some of our competitors), and now I’ve been officially Cannes-ed.

But after my work obligations ended on Sunday, and before the “big” Cannes Lions Festival started on Monday, I found myself alone, on the Cote d’Azure, with 24 deliciously un-obligated hours, and an internationally-valid motorcycle license. Here comes the riding pivot: What to do?

After a bit of searching, I found YOU-RENT CANNES (it’s just down the beach from the Palais, in front of the marina and right below the Radisson Hotel). Since it was a Sunday, the nice rental guy was unable to locate a proper motorbike (his partner keeps them off site and wasn’t picking up the phone on a Sunday morning—which, after a typical Cannes Saturday night, I doubt anyone else does).

But they did have several Vespa GTS 125s, including a spanking new Ferrari-red one, just €79 for 24 hours.

So I set about for a two-wheeled version of a Walkabout, wandering east, west, and even a little north around the Cote d’Azure, soaking up the essence of the French Riviera.

My first, immediate impression—even in town—was how normal and integrated it felt to be riding a powered, two-wheeled vehicle even in a tangled, congested area like Cannes. It seems like European drivers assume and accept the ubiquity of two-wheeled traffic, and so motorbikes and scooters flow seamlessly in and through traffic without much drama.

Drivers yield or lane-share; pedestrians deftly thread their way in front of or behind you, as speed or traffic allows. And you often find yourself in an entire school of scooters and motorbikes, whose riders absolutely don’t wave or nod to each other in karmic biker solidarity (as in the US), because of the utter utilitarian ubiquity of this means of travel. That’d be like nodding to someone at a Laundromat because they were also using a clothes dryer.

I guess the best way to describe the foreign (but also immediately familiar) vibe of Euro-scooting would be accommodating. It’s comfortable, normal, and even kind of anonymous. A nice feeling. So I took my little two-wheeled Ferrari for an end-to-end scooter tour of Cannes, starting on the western tip by Le Vieux Port, and working my way east along Boulevard de la Croisette around the Port Pierre canto, and then to the other side of the Casino, where the wind was kicking up for the kite boarders.

According to JC, the dude from the scooter rental place, Cannes was OK, but the Cote d’Azure was better sampled a few towns east. So I set my sights, and followed the signs to Cap d’Antibes.

It was a neat ride through several  towns, including a brief stint on a little coastal highway, which was an adventure in itself given that my 215 pound frame was being conveyed by a 125cc motor. That’s 4 ounces of cylinder displacement (about the size of a tiny diner juice glass), and a lonely single piston the size of a thread spool.

But that little engine could actually keep up.

The weather along the way was uncharacteristically cloudy and cool, after a week of blistering Cannes heat; between Cannes and Juan Les Pins I was treated to a miniature Mediterranean rain squall, although Mr. Prepared-for-Anything was, well, you get the picture…

The ride to the Cap took me on a climb through some lush coastal hills cluttered with gorgeous gated villas. I passed one street that was an accidental tribute to my friend and colleague, Chris Palmer, who was also in Cannes (and whom I got to hang with earlier in the week, along with my old pal Nina Greenberg). Here’s Palmer and Nina…

And his namesake allée.

After the hills, I wended my way down to the sea and spilled out on the crisply-named Boulevard de Bacon, taking a “lap of of the Cap” before settling into the Café Crystal in the heart of town for “un croc monseiur, pomme frites et un Coke Lite, sil vous plais.” If the French live on grilled ham & cheese sandwiches and fries, how come they don’t seem to get fat or have heart disease?

After this refueling, I took the longer way round back to Cannes, riding through a summer mix of Mediterranean  sun and drizzle.

When I got back, I hooked up with some advertising & PR friends, who kindly invited me to dinner at a little place “just up the hill in Cannes.” It was raining a little more now, and getting dark.

They were traveling in climate-controlled comfort with a driver. I was on a 125 cc rental scooter with a windbreaker, no GPS, a half helmet, and fully no idea where we were going. But it was “just up the hill!“

But my 10 kilometers of terror yielded first to calm, and then joy, as we climbed past traffic and up into the hillside village of Mougins, where I was about to be treated to an epic meal here.

After dinner, I had a chance to meet the artiste behind all this, Msgr. Denis Fétisson. He was utterly cool and charming, and wanted to make sure we’d enjoyed evert tine’s-worth of our meal. Denis also peppered me with questions about my favorite NYC restaurants; I told him I was a big Danny Meyer fan, and that he was very Danny Meyer-like in his graciousness.

I bought one of Denis’ books and asked him to sign it for my dinner host, which he did with a lovely and personal note; my only regret was not also getting one for my wife. So the next day, when I got back to Cannes (after a marginally less-treacherous ride home—glad I stuck to coffee) I decided I had to get her something else instead.

After a little Cannes window shopping from my scooter seat, this caught my eye:

Alas, it was  €36,500,000. Oh well—maybe something from Duty Free? (I actually hit the honey-gift jackpot at a perfume & home store named Fragonard

Well, on my next and final morning, I still had a couple of hours left until I had to return the Vespa, so I headed in the only remaining unexplored direction: west.

This time, the road out of Cannes ran straight along the beachfront, first past the marina…

And finally out to Theoule-sur-Mer, a smaller, quieter, more subtley-wealthy little enclave than Cannes or Cap d’Antibes.

It was a pretty little town with a mellow beach, and high, palm-lined hills looming above. I followed the advice of JC the scooter-rental guy, and just headed up. The syringe-sized cylinder in the little Vespa GT could’ve used an injection of power to haul my fat American ass above sea level, but slowly, putteringly, up, up, up we went…

As we climbed, both the views and the real estate increased in splendor.

Shortly after snapping this selfie, a slightly indignant homeowner came huffing up her driveway, with a look that demanded “who the hell are you, and who permitted you here?” In a French accent, of course.

So much for liberté, egalité and fraternité.  So with that French kiss-off, I fired up my little GTS and headed back down to more democratic elevations.

I went as far as the outskirts of Theoule, but with 25KM until the next major town, it was time to make tracks back to Cannes.

This time, with the sea to my right, I could marvel at the beaches along the way home. I’d brought a bathing suit and towel, and decided to stop and sample la mer. Pretty remerkable, if you ask me. Not too cool, not too warm, and even a few mini-swells for bobbing.

I think I could get used to this.

When I finally got back to Cannes,  I said goodbye to my to trusty little Vespa, and hoofed it back to the hotel to clean up before a final night on the Scoot d’Azure.

Most of my friends had already headed back home, so I was on my own for dinner. I meandered a few blocks from the hotel looking for a cafe, and bumped into several agency folks I knew, already deep into the pink stuff (they were just getting started on their week in Cannes, as the main Lions show was just ramping up).

But I’d had my fill of socializing and partying, so I slapped backs and shuffled off in search of a solo place for dinner.

I found a handsome little cafe with a half dozen outdoor seats, and settled down for an appropriate last supper in Cannes.  Salade Nicoise, and a tall, cool glass of Pernod.

“On second thought, yes monsieur, I will have another one. I’m on two feet tonight—not two wheels.” And my flight isn’t until late tomorrow morning.