Waaaayyyy back in the day, as in back in the good-old “10-inch vinyl and cassette mixtape, Evil Empire/Converse hi-tops and Cold War eighties” kinda day, when I was a college kid living on Pine Street in Burlington, Vermont, I got deeply into this: 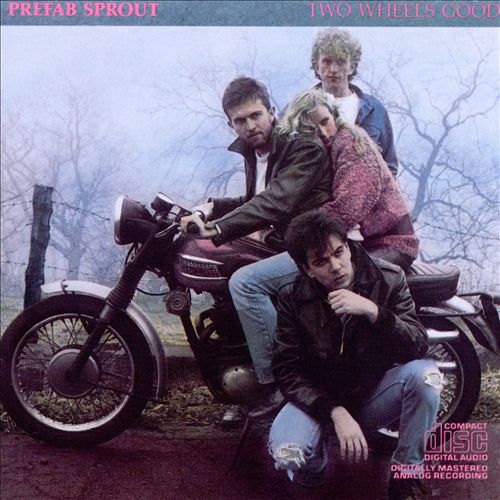 (You know, other than the upturned collars and new-wave pompadours, not too dated…and Triumph made a small fortune reissuing modern/vintage versions of that bike, a late 60s Triumph TR6C, according to this pos

Anyways, it was an album by the English folk/pop band Prefab Sprout, entitled Two Wheels Good, which I likely picked up after pouring through milk crates of imported records here:

At the time I was a goofball college sophomore at the University of Vermont, writing music reviews for the Vermont Cynic, chasing the girl whom I’d ultimately marry (who loves you, Liebe?) and buzzing between English classes in Williams Hall and Old Mill, monte cristos at Leunig’s and my peanut-sized downtown Burlington apartment on this:

It was my first scoot, a used 1983 Honda Aero 80 (unintentionally ironic, being the eighties) and the entry drug into what would become a life-long two-wheeled habit.

The little Honda allowed me to live out a New England collegiate version of a Quadrophenia rock-opera fantasy, except I was in a scooter gang of one, there were no rockers (or mods, for that matter), and virtually no one in Vermont seemed to be listening to The Jam, except me. (Which also explains why I had This Is The Modern Worldstenciled onto my engine cowl with Futura press-type.) In addition to the sharper, more angular lines on the scoot, note the artificially pegged proto-skinny jeans (courtesy of a stapler), Bass Weejuns with actual pennies in them, and original Wayfarers…a sort of Burlington/Brighton /LLBean homage.

Still, and going back to the original musical motivation for this post, it was “Two Wheels Good.”

I was never entirely sure what that meant until I’d been riding for quite a bit longer, and then it came to make all the sense in the world to me. As it did this past Saturday, when on an lanquidly-perfect early June morning, I managed to jam maximum two-wheeled goodness into the hours between dawn and lunch.

Here’s just how good it was.

I got up at the absolute crack of dawn (around 4:45) had a coffee, suited up, and trundled out to the garage in my armored space suit to take the new Super Ténéré out for a spin. I’ve only had the Ténéré for three or four weeks now, and I’ve gotten some seat time in, but you need 600 miles on the bike in order to do the first oil change/final-drive service. I was 200 or so shy of that, and since I’ve been eager to experience the SuperTen’s vaunted dealer-free reliability, I was eager to hit 600 and get this one over with.

So I rolled the bike out to the road (not to wake the family), fired her up,  headed to BP for fuel, and then down to I-95 for a morning run east, straight into the rising sun.

At virtually all other times, I-95 is a shit-show. But at 5:30 AM on a June weekend morning, the SuperSlab was virtually empty, and 95 was actually sweet. I motored east through Southport and Bridgeport and across the Housatonic River between Stratford and Milford with the horizontal sun burning a hole into my retina, even through two helmet visors (clear and a smoked sunshade) and sunglasses.

(Note to self: on morning runs, run west.)

A little optical relief came as the highway jogged north around New Haven Harbor, then south again and back to hard east through Branford, Guilford, and Madison. But even so, I was squinting with joy.

The Super Tenere is a super-pleasure on superslab: low-revving, stable and smooth. Wind protection is reasonably good, although I may consider a secondary deflector to keep helmet-buffeting to a minimum. But the engine has ample power to keep revs low—down around 2500—so it rides like a languid june morning itself: relaxed and unhurried. If you need a burst of passing power, its yours for the twisting. But otherwise, it’s happy to burble along, eating miles of coastal Connecticut asphalt for breakfast.

I had no real plan in mind and no real timing; just heading east on the Governor John Davis Lodge Turnpike, racking up miles until it felt like time for a coffee and u-turn, so I could be back before the kids got up. It started to feel like this way  when I began seeing the exits signs for this: 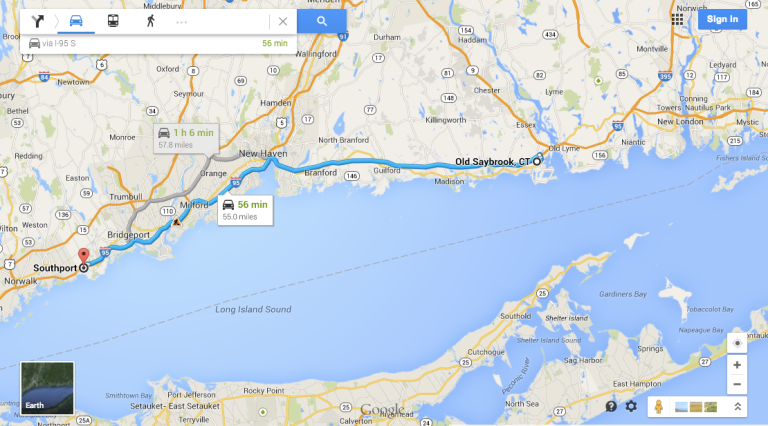 Old Saybrook is on the mouth of the Connecticut River, and it’s the quintessential southern New England town. Clapboard and seagrass and oaks and maples and saltmarsh, flags and front porches, lavender and sea-pebble sidewalks.

I rode down to the Sound, where I had early morning company—the Stripers and Snappers crew, drinking coffee and waiting for bites.

Just to the side of the river are several historic sites, including a place where other vehicles (with a lot more than two wheels) used to take a spin…

And up a ways from there is a small monument and statue marking a Puritan-era settlement, from nearly 380 years ago. Say Brooke? Say old.

While it was delightful and I could have spent the entire day contemplating Connecticut life in the time of Puritans and Pequots, there was two-wheeling to be done. So I grabbed a coffee at Starbucks (the Paperback Cafe, a local spot which I much prefer, was closed), and headed west, this time with the sun shining prescisely where they say the sun don’t shine, on my backside.

Quite an improvement over the ride east. And man, it was nice.

I got home just as my crew was starting to stir, and getting ready for Saturday morning  spring stuff: soccer tryouts, studying for finals. Everyone had something to do (or somewhere to go), so I tucked my Ténéré in the garage (the entire Saybrook run clocking in at 120 miles, roundtrip) and decided to extend my Two Wheels Good morning by suiting up for a different kind of ride…

Besides being a great place for motorbike riding, Fairifield County happens to also be a cyclist’s dream, with a beautiful mix of hills, flats, and generally good roads for exploring. So now, under my own two-wheeled power, I headed up to Easton’s Morehouse Lane, which is as lush and beautiful as any bucolic spot in Vermont.

Yours truly, in medias ride.

And here’s a beauty shot of my bike (a close to 10-year old Cervélo Soloist—I seem to like bikes with accented és) against a freshly-sown field at Candee farm, a pick-your-own berry place on Morehouse.

Nothing to pick yet, much less a leaf to be seen (it’s still way early), so back home. A little more than an hour after I started (and at least one water-bottle-worth of sweat) later, I pulled into my driveway and glanced down at the mileage: 20.14. Not quite a century ride—but maybe more of a millennium one?

Which concluded phase two of my Two Wheels Good extravaganza. And brings me to the final intstallment, a beach scooter-run. Start with my trusty 2006 Grantourismo…

And just add water. I scooted down to Burying Hill Beach, then along Greens Farms Road and down to Compo.

Interesting comparing the ergonomic and effort differences in riding the Vespa, my bicycle, and the Super Ténéré. The Vespa is simply effortless fun, in the same way my old Honda Aero 80 was. Step-through, twist-and-go fun. A pleasure for erranding, Flickable and playful—I mean, it rides on a pair of donuts.

My road bike requires considerably more effort, but also delivers considerably more in return. A great cardio workout, the silent uphill spinning (punctuated by that signature Campy deraileur-buzz on downhills), the rhythmic, pumping zen. And the liberating (but sometimes scary) feeling of traveling nearly forty miles per hour on an aluminum and carbon fibre toothpick, wearing Lycra and a styrofoam pith helmet.

And finally, there’s my big bike, the Super Ten, which does something neither of the other two can: cover significant ground at comfort and speed. How else could you squeeze in a 100+ mile motor cruise, heart-healthy, hour-long cycle spin, and a scooter ride to the beach, all before…lunch?

Eat your heart out, non-riders. It’s all two wheels good.