It’s getting to be mid-November, and there are not many riding days left. The light’s getting sideways and our copper beech is already almost bare, decimated by clouds of starlings.

They seem to exfoliate the mighty tree in just one or two seatings, dining noisily and creating a beech-nut hail that litters the ground below, with these:

Apparently beech nuts are not bad eating, but I have no idea how they’re connected to the gum

Thus for me, any two-wheeled November adventure begins with a lap of driveway nut-cracking. It can be louder and sharper than my F8’s low-RPM burble, but it always looks pretty with a luscious swirl of these.

Threw on my kit, and threw a leg over this.

And went for an Autumn New England ride.

From the outset, a positive omen (mashed up with a guitar-string mnemonic): Every Good Bike-ride Does Fine, especially when a ladybug crosses your path.

BTW, props to VW for going lower, flatter, and more retro with the current iteration of the New Beetle. It’s almost cool enough for a guy. Almost.

I had a couple of hours at my disposal, so I decided to head north to Newtown, CT, which has always been one of my favorite day-trip destinations (along with the Sycamore Diner in the next town over). But since the horror that befell Newtown last December, riding up, through, and around there is still just as beautiful. But inescapably sad.

A college friend of mine, Rob Cox, grew up in Newtown and moved back there to raise his family. He’s a journalist and founding member of Sandy Hook Promiseand he wrote a heartbreaking (but also stirring and powerfully affirming) piece in the Wall Street Journal, entitled When Your Town Is Newtown. Absolutely worth a read.

And when I’m in Newtown, I remind myself that it’s still such a good town, and a kind town. Just like your town, or my town. Only it was struck by human lightning. Lighting can strike anywhere; you can’t hold it against a town just because it happened to make landfall there.

I have my own private variation on the Promise. I promise to keep riding up and around Newtown and Sandy Hook, getting open-faced hot turkey sandwiches at the Blue Colony Diner, caffeinating at the Church Hill Road Starbucks, gassing up at the Mobil just up the road, and talking to folks in a normal, neighborly way. I promise not to wonder if every Newtowner I speak with was personally singed by the human lightning that struck last December. I promise not to over-tip the waitress at the Blue Colony because I feel sad or awkwardly guilty for it having happened in her town, and not mine. I promise not to ride up to the jersey-barriered, recently razed Sandy Hook Elementary School out of morbid curiosity. I’m sure the good people living in that immediate neighborhood don’t want or need gawkers, no matter how sympathetic or well-intentioned.

And if there’s ever a candidate who supports sensible measures to curtail gun violence, I’m in. Promise.

On other rides to Newtown, I’ve explored the area just north and east of Sandy Hook. Church Hill Road and Glen Road along the river, then River Road to Fish Rock Road and peeking in and out of Lake Zoar, which always sounds curiously like a destination on Star Trek to me.

I get a kick out of passing the spanless “bridge to nowhere” on Lake Zoar (really just a damned-up section of the Housatonic); it’s these two huge concrete ‘ghost trestles’ standing in the middle of the water, stripped of connection to anything, except maybe their faintly-remembered past. (For a neat history of the 19th century Lake Zoar Toll Bridge, have a look here, courtesy of Oxford Patch.)

But for today, I’m just heading up Route 25, which becomes Newtown’s elegant Main Street, punctuated by the town’s massive and iconic flagpole, the northernmost apogee of my ride. After apexing here, I’ll descend down Sugar Street (Route 302), past the famous Ferris Acres Creamery

Not the biblical variety. The botanical one. AKA Euonymus alatus, which sets New England roadsides ablaze every autumn.

Somewhere between Newtown and Bethel, the fire begins. First, embers…

Until the roadway is en fuego, and I feel a little like a cross between Johnny Appleseed and Evel Knievel.

Of course, the ride isn’t always on fire. You go through waves of other color, sometimes gold…

But always stunning (and here, sunning).

I thread my way back down through Fairfield County, first Bethel then West Redding then Redding then Weston, riding towards the southernmost point on this two-hour color-loop. And I head for Burying Hill Beach, in the Greens Farms section of Westport. 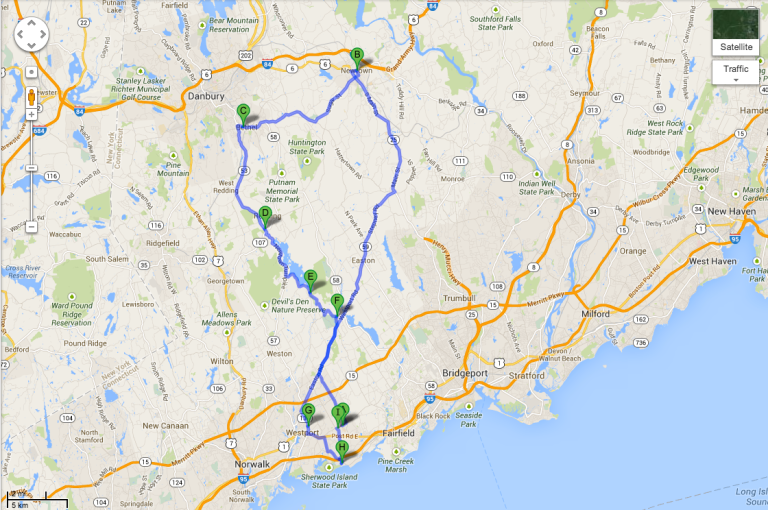 First, a favorite sweeper by the Sound in Southport…

Then around the low bluffs on beautiful Beachside Avenue…

And out to Burying Hill. It’s not much of a rise (yes, it’s that little knoll on the left with the structure), but during hurricanes and other Sound-raising events, it’s the only genuinely high and dry ground around here. Which might have made for a better burial ground, back in Indian or colonial days.

So two hours in the saddle. Fifty-nine miles, covering all kinds of emotional terrain, from Newtown to my town. And nature’s very own retina display, burning bushes and coppery beeches and a hundred million other hues flashing through my visor—enough to make your head explode. Google Glass, eat your heart out.

Last, to the chilly beach, the long, low-angle light of November, and a few guys in fleece and waders still casting for lingering blues.

And finally home, to that bittersweet feeling as you roll your bike into the garage, plug in the tender, top the tank off with Stabil, and wonder if this is Goodnight, Moon for your riding season, or if maybe you’ll get one more Thanksgiving lap. Because this week, The Weather Channel here is calling for snow  (at least, that’s what Noah, my snow-addict son, told me).

I made a little movie to remember it all, set to a haunting, autumn-like song by the band Real Estate, called “All The Same.” It’s from their album Days (absolutely brilliant; buy it here.)

Days. They get shorter and colder.

Thankfully, they get longer and warmer, too.